Yes, but where does the electricity come from, Daddy?

To prevent my Mini-E from being, in actuality, a coal burning car, I have now signed up my JCP&L barn account (the barn is my garage where the wall charger will be) to use clean energy provided by Community Energy, Inc. This choice is part of the NJ CleanPower Choice Program. The clean energy choices are a little confusing in the NJ CleanPower brochure, but the bottom line for me is that I now pay an additional $.02/KWH for my two JCP&L utility accounts so that 100% of my energy usage comes from the Community Energy clean power sources. The mix I selected (despite the text of the message below) was: 50% NJ wind, 49% small scale hydro, 1% NJ Solar.

What this means in practice of course is that JCP&L is obliged (and is independently audited to ensure compliance) to purchase 100% of my electricity usage from Community Energy sources.

Kermit and his Kilowatt Kar

That's right - it's not easy being green, but it's going to become a whole lot easier in April when I get my Mini-E. I was notified today by Morristown Mini that I was one of the lucky 500 in NY/NJ chosen to be able to participate in the field trial being conducted by BMW to test an all electric Mini-E. Unlike lucky Californians who will get their cars in February, us East coasters have to wait till April. Nevertheless, I've already had my picture taken next to a Mini-E. Here it is: 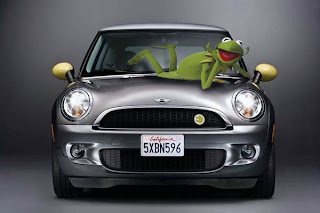 Yours,
Kermit
Posted by Hal Purdy at 5:44 PM No comments:

I submitted my application on November 20, the day the application process opened. First, the deadline was Dec. 10, then MiniUSA deferred the deadline to Dec. 24. I haven't heard anything back from MiniUSA at all. Not even an email confirmation that my application was received. I'm starting to be worried.
Posted by Hal Purdy at 12:28 PM No comments:

I just completed my Mini-E application. This is MiniUSA's trial of an all electric Mini for a lucky 500 people in the NY/NJ area. They ask in the application for my blog URL so if you MiniUSA folks are reading this, I have two words for you: Pick Me!
Posted by Hal Purdy at 5:50 PM No comments:

Combined mileage when riding a motorcycle during the summer

I kept track during 2007 of the number of days where I could've ridden a scooter or motorcycle to/from work. I excluded days when I was on vacation, working at home, needed to do errands, or where the weather report called for rain with chance of precipitation >= 50%. According to these rules, I could've ridden a motorcycle to work 59 times in 2007. With a 26 mile round trip, this translates to 26 * 59 = 1534 miles a year.

I also calculated an estimate of the total number of days I commute to work at Florham Park, 26 miles roundtrip. This estimate took into consideration vacation, days when I went to Middletown or elsewhere and working at home one day a week. According to my calculations, I commuted to Florham Park 177 times. This translates to 177 * 26 = 4602 miles.

Finally, I made a rough estimate of the total number of miles I drive in an average year. This one is hard because it depends so much on how many and what kind of long distance road trips I take. For 2008, for example, a number of college visit road trips make this number larger than average. Anyway, I set this number at 10,000 miles but will recalculate for 2008. What is hard to work into these calculations are the miles near home where I now ride my bike. This mileage is probably pretty small, but the savings are disproportionate because of the poor fuel economy experienced on short trips.

So, commuting accounts for less than 50% of my driving, and of commuting, I could expect to ride a motorcycle a little more than one third of the time. To get my overall fuel economy, for 8400 miles a year, I use my automobile mileage figure of 25 mpg (this may be a little low). For 1600 miles, I use the expected motorcycle mileage of 70 mpg:

So, I improve my overall fuel economy by only around 3 mpg, and it's still less than what Ellie gets simply driving a Honda Fit all the time (average above 32 mpg). This means I need to a) find other opportunities to ride a motorcycle or bike, and b) drive a more fuel efficient car whenever possible. I'll have a better estimate of automobile miles in 2008.
Posted by Hal Purdy at 10:50 AM No comments:

After much sifting through NJ democratic committee documents and calculating vote counts, I think I understand the NJ delegate selection process and have as good a vote count as can be gotten on the web at present (though I'm going to put my librarian friend, Mallary, onto the trail for even better "by delegate district" vote counts). The bottom line is that we may very well have helped Obama get an extra Democratic Convention delegate over Clinton, and, according to the best data I can find, and if I'm right about the county to district allocation, Obama won the race in the ninth delegate district by ***ONE VOTE***. If true, it means we were responsible for Obama getting an extra delegate in the ninth delegate district.

I've double checked my addition - check it out yourself with the explanation below combined with the vote counts at: http://hosted.ap.org/dynamic/files/elections/2008/by_county/NJ_Page_0205.html?SITE=NJNEWELN&SECTION=POLITICS

So don't let anyone ever tell you that it's not worth the time to cast a vote, even an absentee ballot.

Unfortunately, the Star Ledger vote counts at the above URL list results by county not by delegate district. According to it, Somerset and Hunterdon counties both have a slim majority for Obama. Warren county went to Clinton by a wider margin. All precincts have reported in for all three counties but I don't know if absentee ballots (like Zooey's) have been counted. However, Somerset and Hunterdon counties have many more voters than Warren so even though Obama's margins were less in Hunterdon and Somerset than Clinton's winning margin in Warren, the overall vote counts are what matter. So, after some calculations, I get that Obama got 28,346 votes in the ninth delegate district while Clinton got 28,345.

The National Convention delegates
and alternates selected at the district-level shall be allocated in proportion to the percentage of
the primary vote won in that district by each preference, except that preferences falling below a
15% threshold shall not be awarded any delegates or alternates.
Posted by Hal Purdy at 6:03 PM No comments:

So, the only truly accurate estimate is that the expansion tank needs to be refilled approximately every 5,000 miles: 98403 - 93772 = 4631 miles. The first refill after 2952 miles was after the coolant conditioner was improperly added to the expansion tank. Next November, should replace coolant again and add coolant conditioner *first* before putting in new Subaru coolant. Maybe take off top radiator hose and add from there to help conditioner get to the heads.
Posted by Hal Purdy at 11:56 AM No comments: